Landrace pig is one of your safe choices as a farmer if you are thinking of growing or developing a business based on pig breeds for meat.

With a special morphology, Landrace is a breed of pigs preferred by those who want to produce pork because it has lean meat with very little fat from which other products such as bacon or pork carcasses can result.

Today we will talk about the origin and history, as well as how to raise Landrace pigs and how to care for them.

The Landrace pig originates from Denmark.

The creation of this breed of pigs was not a simple process, but one that stretched over several years in which several tests and breedings were carried out under strict control and supervision by the Danish government.

The Landrace pig breed was successfully completed between 1850 and 1907 by breeding some local pig breeds with English ones, such as the Great White or the Middle White, which were brought directly from England.

The Landrace pig breed was so successful that Denmark became the leading bacon-exporting country. Their main focus was the production of the English’s favorite bacon, namely the one called “Wiltshire” bacon. Due to this enormous success, the Danes refused to export this live pig breed until the Second World War.

The first export of Landrace pigs took place in America and consisted of 24 live pigs. The export was possible due to an arrangement between the United States Department of Agriculture and the Ministry of Foreign Affairs in Denmark. In America, this breed was submitted to further tests and crosses resulting in four new breeds.

Restrictions on the export of live Landrace pigs ended in 1949 when the Danish Ministry of Foreign Affairs agreed to the USDA’s proposal to lift restrictions on the propagation of purebred Landraces in America. It didn’t last long, and in 1950 the American Landrace Association was founded with the main purpose of selling purebred breeding animals. 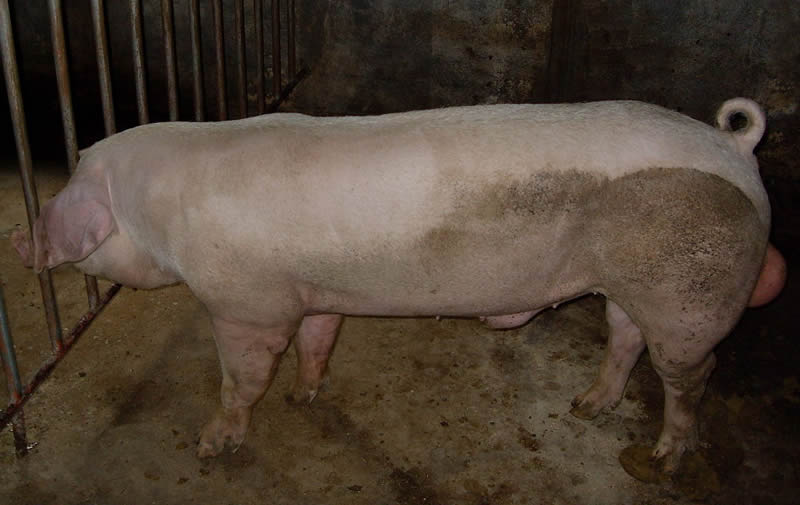 The British Landrace pig is the most popular pig breed in the United Kingdom, especially in the East and Yorkshire. It was created after 1949 when 12 Landrace pigs were brought to the United Kingdom from Scandinavia. Bred and raised for pork and bacon, these pigs have long bodies, small heads with long, heavy ears, and white skin.

The Danish Landrace pig is the original breed from which all others are derived. This pig has a long body with a very slightly arched back, some long and bent ears, a small head, and a long snout. Two skin colors are distinguished for this breed: white and piebald.

Did you know that the Landrace pig’s scientific name is Sus scrofa domesticus ?

When it comes to the Landrace pig characteristics, it differs from other breeds by size, weight, skin color, and other morphological characteristics.

As for its aspect, the Landrace pig color is white, some would even say white-pink, with white and extremely fine hair. You can also identify a Landrace pig through its small head, slender and massive body, large and bent ears, as well as for its well-developed musculature. Moreover, it has a long torso and limbs of suitable height that support his body weight quite well.

The Area of Spread
With over 350 pig breeds in the world, the landrace breed is in the top 5 world’s most popular breeds of pigs next to Berkshire, Chester White, Duroc, and Hampshire.

The Landrace breed is widespread both at the European level, with some countries such as Denmark, Germany, and Sweden have their specific variants, as well as in the United States of America, which is an export of this breed.

How to Take Care of Landrace Pigs

To maintain Landrace pigs, you must first pay attention to the following two factors: hygiene and the climate of the stable. Landrace pigs prefer to stay clean and in a moderate climate, so if these maintenance conditions are not maintained, then the productivity will decrease and the sows will give birth to a smaller number of Landrace piglets.

The maintenance of these pigs requires that you change their bedding often because they prefer to have dry and clean bedding. You also have to provide them with a place to relax because Landrace pigs are full of energy. A green area with a small shelter from the strong sun is perfect for them. The barn where they are kept must have access to sunlight and not have a temperature lower than 68°F (20°C) all year round.

If the temperature is lower than that or if the barn is not naturally lit, then the Landrace pigs tend to get sick.

What to Feed Landrace Pigs

The feed offered to the Landrace pig will influence the quality of the meat obtained. In general, your goal would be to obtain lean meat with low-fat content. For this, you must be sure that their diet includes:

The ratio of all of the above must be 70% compound fodder and 30% green mass and juicy fodder.

Like any other breed, Landrace pigs have their advantages and disadvantages. However, in the case of this breed, the ups are much more numerous than the downsides.

Landrace pigs are easy to raise and take care of because they are not aggressive. They have an increased prolificacy in reproduction, with a sow giving birth to up to 11-13 piglets at a time.

Landrace piglets also grow and gain weight very quickly due to sows that have great maternal behavior, and at the age of 6 months, they can be ready for slaughter.

Landrace pigs can live up to 10-15 years on average. 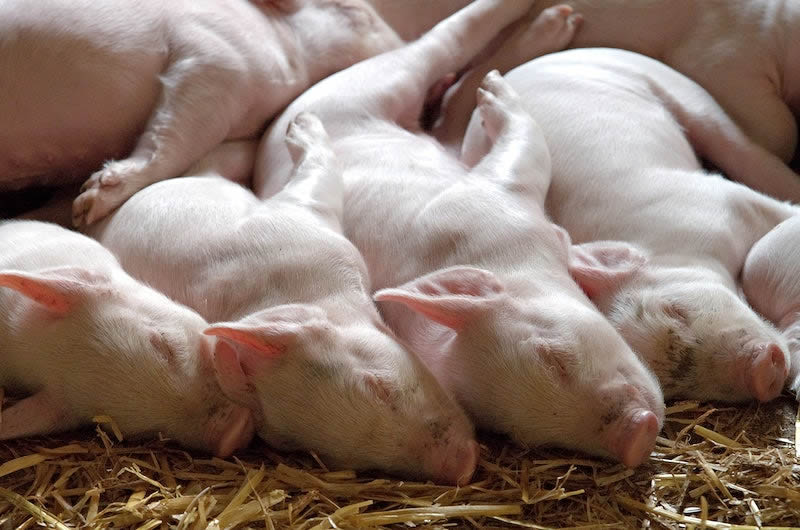 Landrace pigs are extremely lively and like to have fun. After eating, they will rest, but the resting place will be chosen according to the outside temperature. If it is cold outside, then the Landrace pigs will choose the stable as a resting place, and if the outside temperature is high, you will find them sleeping in the shade or in water and mud. During the rest period, the pigs will not respond nor will they be disturbed by any external stimulus.

As for the piglets, they will always be with the mother-in-law for the first week after birth.

Landrace pigs can start their mating period somewhere at the young age of 4-5 months. The heat period in females usually lasts around 4 to 6 days. When the sow’s estrus begins, she will spend more time with other pigs, and immediately after mating, she will retreat to a narrower corner.

A Landrace pig can produce up to 13-14 piglets at a single birth. 4-5 days before birth, you will notice signs of fetal movement in sows, and 7-8 hours before, you will see that its genital organs will swell up. The act of birth lasts somewhere from 30 minutes to an hour.

The Landrace sow has a good maternal compartment. It takes care of the piglets and will feed them whenever needed. Lactation will be stimulated by the piglets, who generally do not need guidance to feed. They will find the sow’s nipples with the touch of their nose.

If the number of piglets is less than the number of nipples, then you will notice how a piglet will prefer to eat at more than one nipple. The piglets will feed themselves about 30 times a day.

In conclusion, if you decide to open a pig farm, Landrace pigs are a good choice as they are easy to raise, not too demanding, and with increased productivity. The meat of Landrace pigs is low in fat and is known to have superior quality. Moreover, meat production is good. You can get around 75% of meat from the weight of a carcass.

About the author: Emanuel Vlad
...
Leave a Comment Cancel reply
FarmerDB is supported by our readers. When you buy through links on our site, we may earn an affiliate commission at no cost to you. Keep reading