When it comes to the biggest combine harvesters in the world, the most important manufacturers of agricultural machinery that stand out are New Holland, Case IH, John Deere, Fendt, Massey Ferguson, and Claas. However, you should know that there are lesser-known brands in some continents that offer good products, an example being Europe, which is quite unknown to some brands that play a significant role in countries from other American continents.

Technical features such as engine power, grain hopper volume, and transfer capacity are at the forefront when comparing powerful combine harvesters.

Here are the top biggest and most powerful combine harvesters you could buy in 2022/2023: 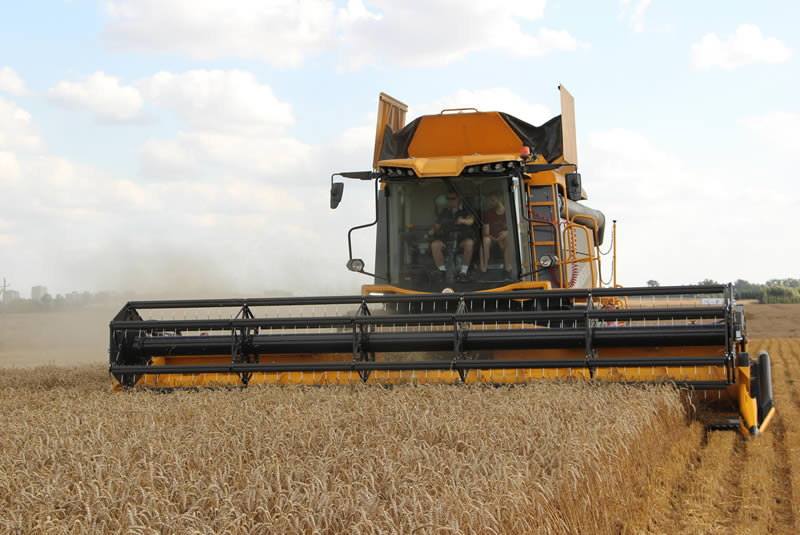 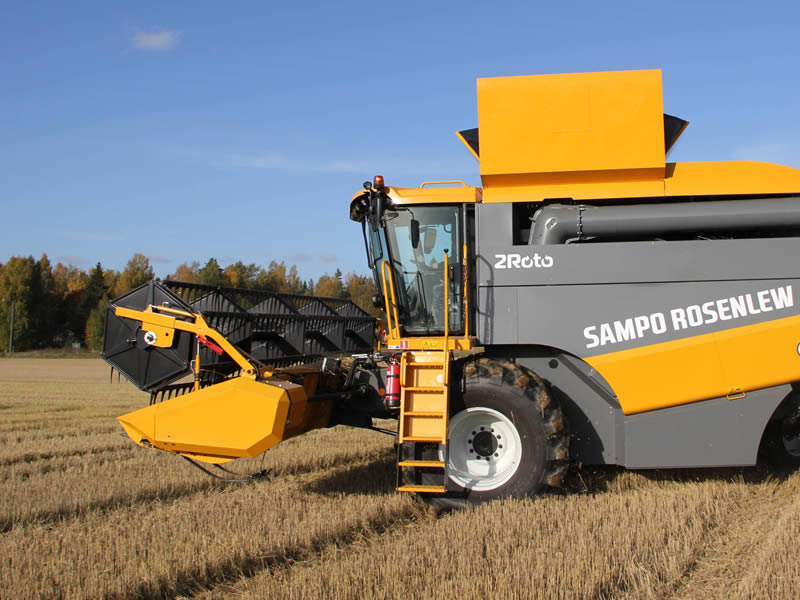 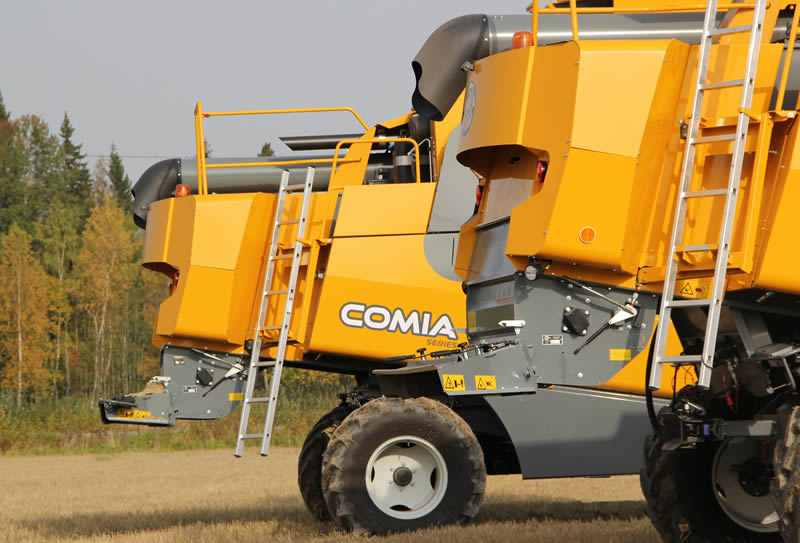 The machines of a manufacturer from Finland are the top of the largest combines in the world. The giant combine harvesters from the Finnish agricultural machinery manufacturer Sampo-Rosenlew belong to the Comia series.

Like some Claas combines, the Comia 24 works with the hybrid threshing system, combining the threshing drum with two rotors. The 6-cylinder engine from AGCO Power delivers 300 hp. Sampo Rosenlew built W-series combines for John Deere from 2012 to 2019. In Germany, Sampo Rosenlew combines are marketed by the Süddeutscher Landmaschinen- & Motorgeräte Fachbetriebe eG ILAFA group. 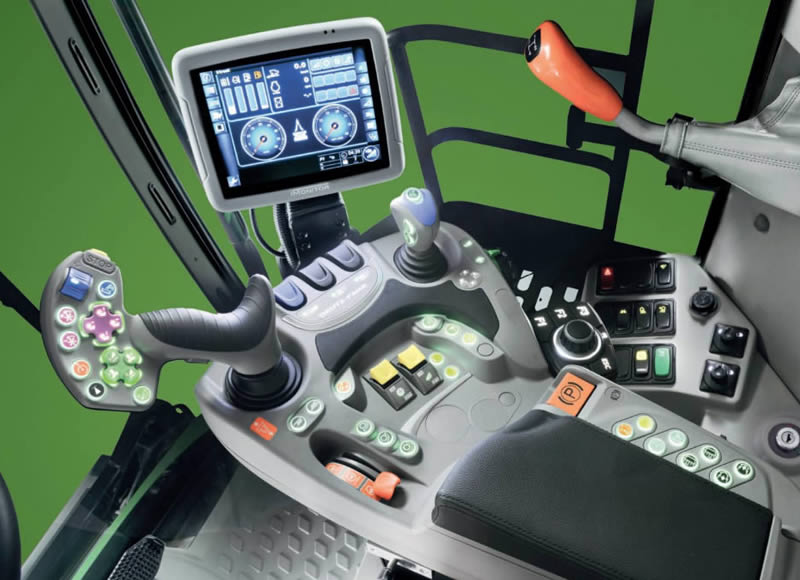 On the next place in the list of the most powerful combines in the world is the C9306, a machine that is also the largest combine in the product range of the German company Deutz-Fahr, which does not build combines with a rotary threshing system. The C9306 model has a 381 HP Mercedes-Benz engine. The grain hopper has a volume of 10,500 liters (2,774 gallons). The Deutz-Fahr C9306 is available either with wheels or, if necessary, with tracks. 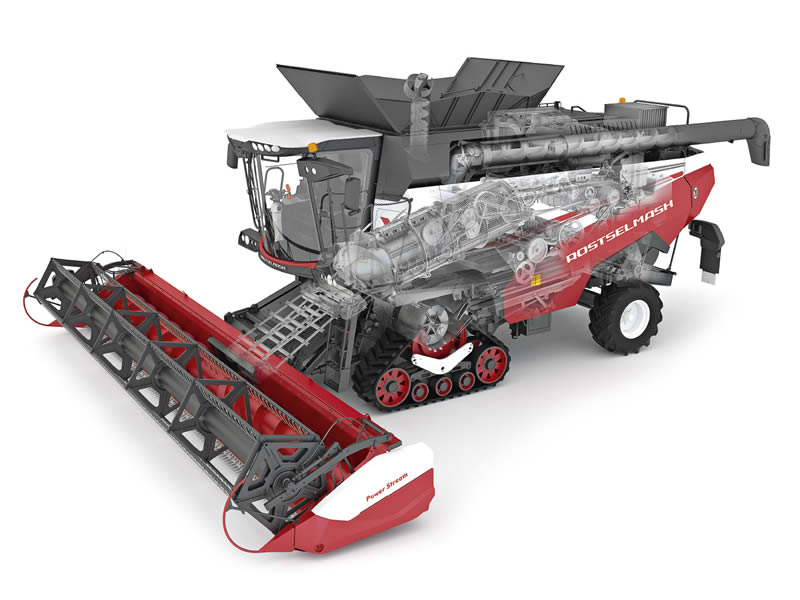 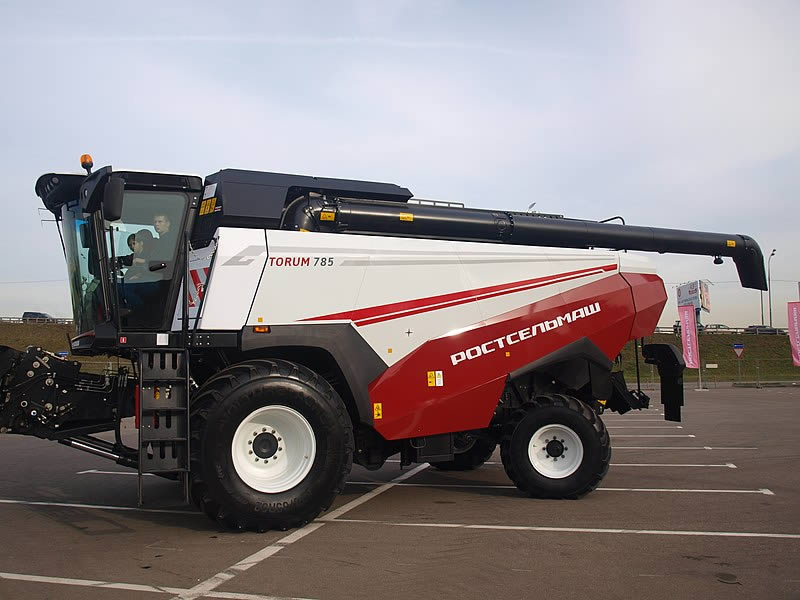 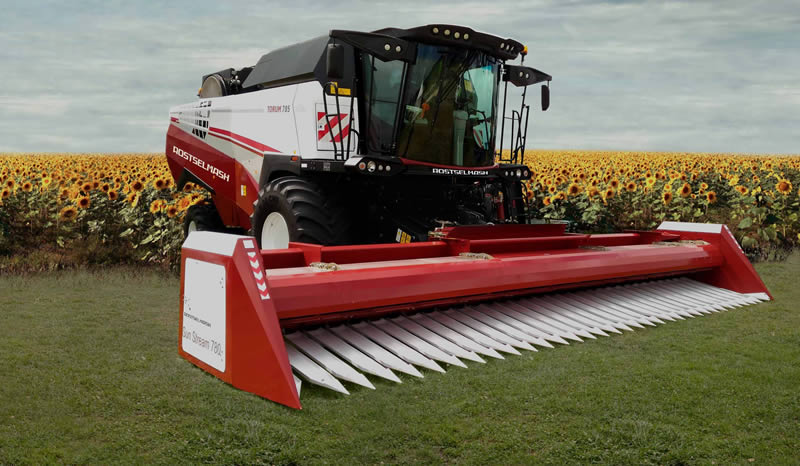 Rostselmash combines can now also be found in Germany. The Torum 785 is the largest model from the Russian company and has a large rotor with a diameter of 76 cm. An 11-liter Cummins x12 engine provides 520 HP combines. The grain hopper has a capacity of 12,000 liters (3,170 gallons), while the whole machine has an unladen weight of 17 tonnes (3,747 pounds). 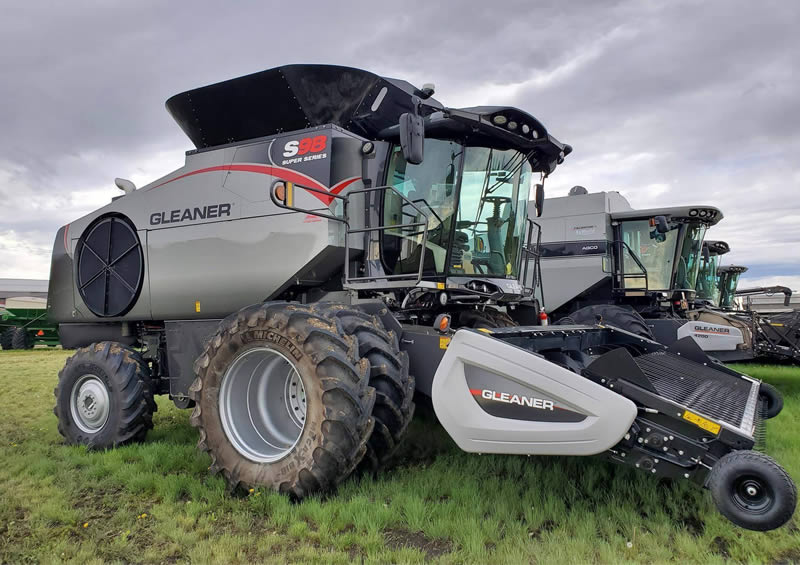 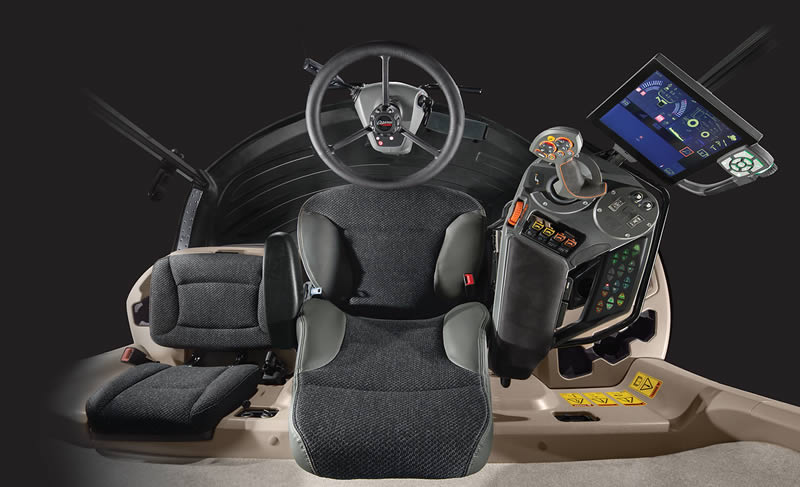 The American group AGCO builds IDEAL combines for the Fendt and Massey Ferguson brands in Italy and the USA. But there is another combine harvester brand that is quite unknown in Europe: Gleaner. The largest model of the traditional Gleaner series is the Gleaner S89. The special feature of the model is the design: instead of installing the rotor in the direction of travel, Gleaner threshers work with a transversely installed rotor. But this has a drawback: the width of the combine does not allow its use on European roads. The Gleaner S89 is powered by an AGCO Power engine that provides 478 HP. The grain hopper has a capacity of 13,700 liters (3,619 gallons). 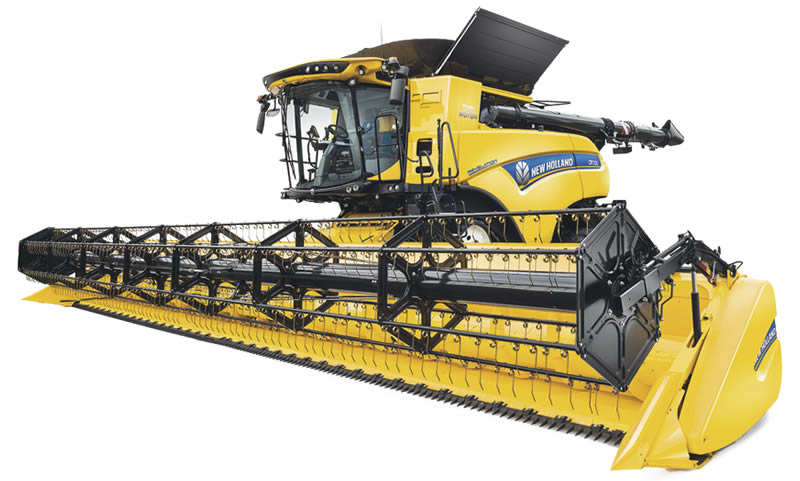 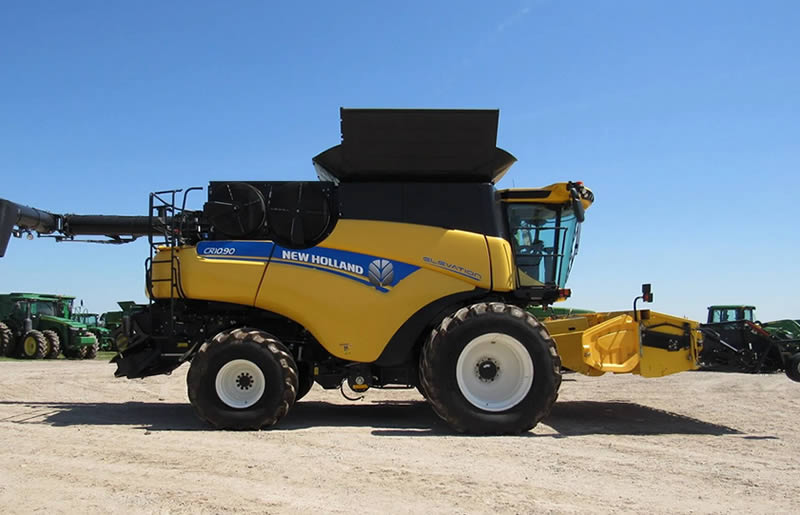 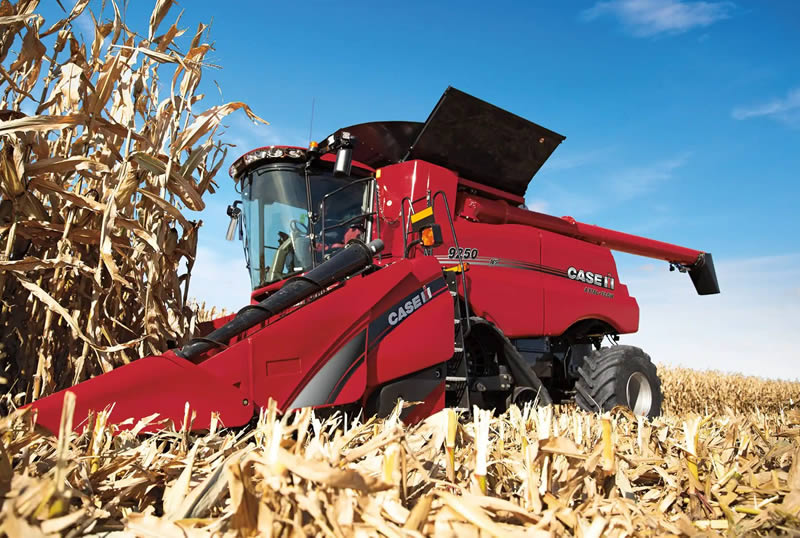 Case IH was one of the first manufacturers to make the rotary threshing system accepted in Germany. Unlike the combines from its sister company, New Holland, the Case IH AF 9250 does not have two rotary rotors but one large 76 cm (29.92 in) rotor. The combine harvester is manufactured and developed in Nebraska, USA. FPT’s 16-liter 16-cylinder engine delivers 625 hp. The collapsible grain hopper has a capacity of approximately 14,500 liters (3,830 gallons). A Case IH AF 9250 combine harvester, the basic version, costs 703,459 EUR (701,316 USD). 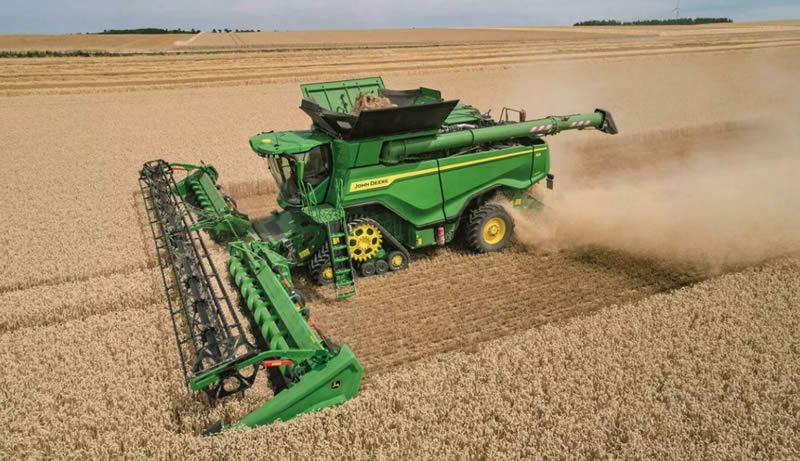 With the X9 combine harvester, John Deere has exceeded all previous performance limits. The manufacturer promises a threshing performance of 100 tons (200,000 pounds) /hour – that’s an 18-ton (3,600 pounds) trailer every nine minutes. The grain hopper has a capacity of 16,200 liters (4,279 gallons). The transfer pipe can pour 186 liters (49 gallons)/second into the trailer. This is the largest combine ever built by John Deere. And the combination achieved superlatives in other respects as well: the widest fingerboard, the highest yield, and the smartest technology. Compared to the John Deere S Series, the X9 has two rotors. The 6-cylinder DPS engine delivers a maximum power of 700 hp. Equipped with tracks, the 32-ton (6,400 pounds) X9 has a travel width of under 3.50m (11.84 ft). 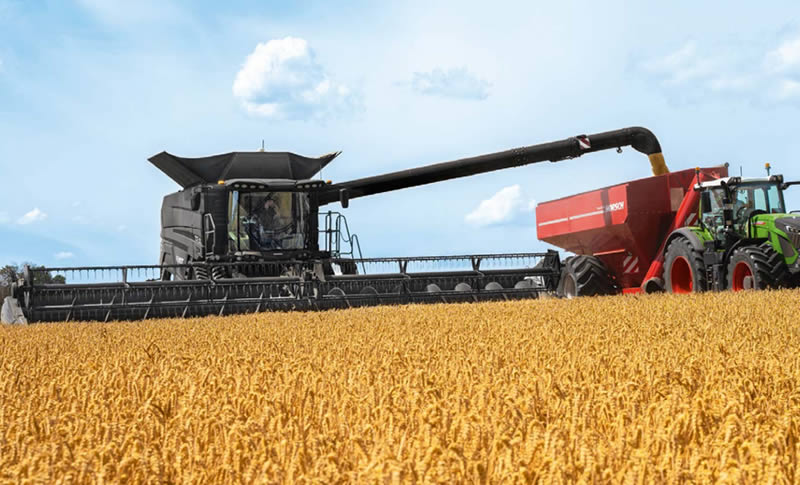 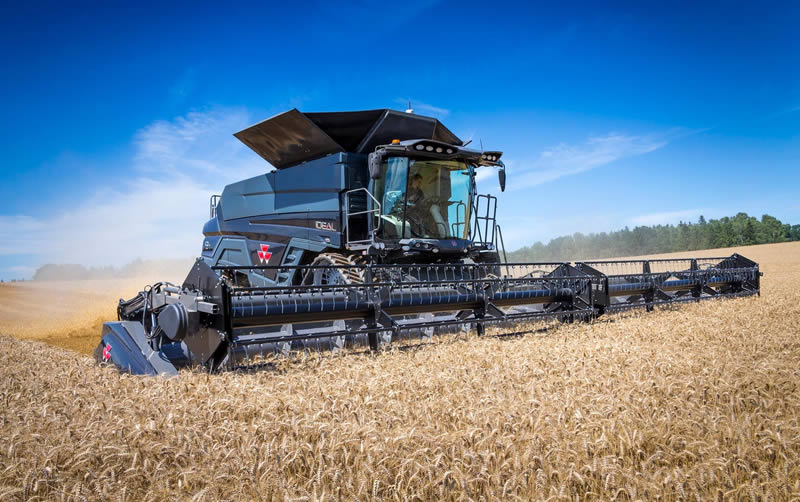 The next one on our list is the Fendt IDEAL 10T, a powerful combine harvester that is distinguished primarily by an exceptional threshing system, which is able to crop under all weather conditions. The agriculture machine is powered by a MAN 16.2l engine capable to deliver a maximum output of 790 hp. Its concave surface is up to 4.54 square meters while the cleaning system comes has four different sections, making it extremely efficient. 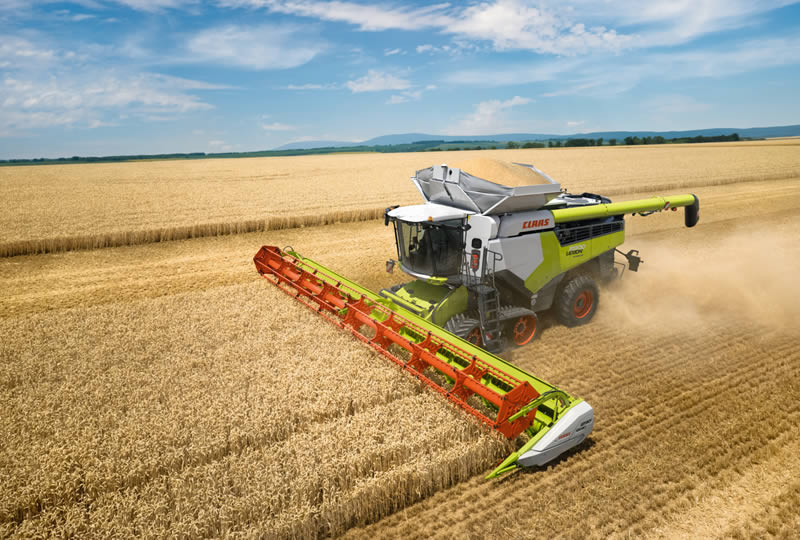 Claas is the market leader in Germany for agricultural combines. Lexion, being almost the only brand in the class of large threshers, Claas relies on hybrid technology for the threshing system, combining a large threshing drum with two separator rotors. The largest model is the Claas Lexion 8900, with a grain hopper of 18,0000 liters (47,550 gallons). The combi has 790 hp from a six-cylinder, 16-liter MAN engine. The largest model always runs on TerraTrac tracks on European roads, with an empty weight of more than 22 t (44,000 pounds).

Lexion also holds a record: the agricultural combine has the longest transfer pipe on the market, with a length of over 11 m (36 ft). The list price for the basic Claas Lexion 8900 variant with standard equipment is $809,940. 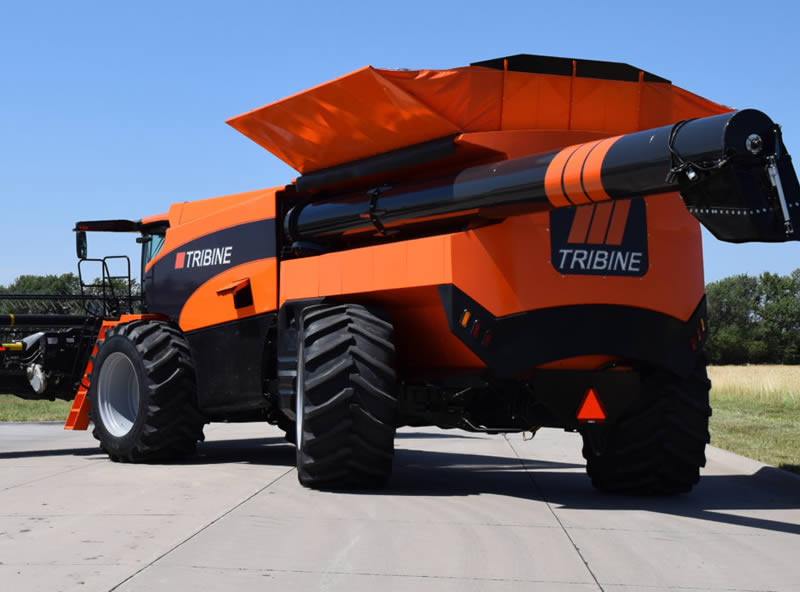 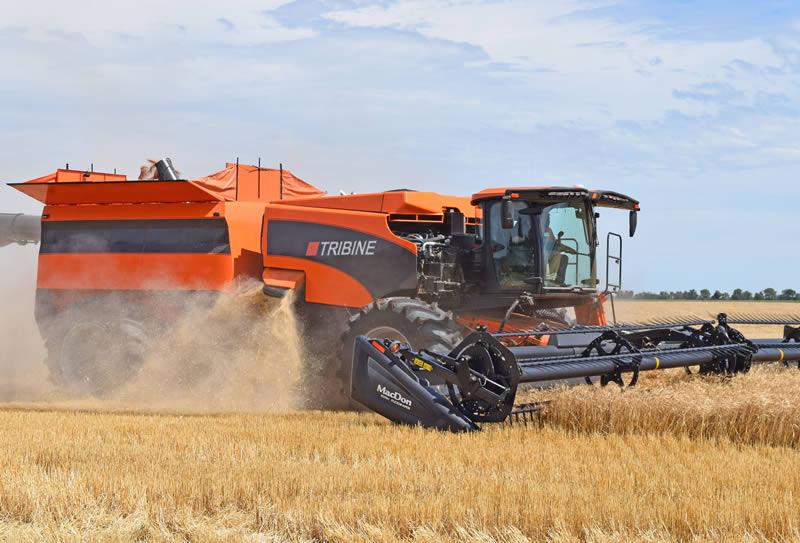 The Tribine T1000 is not only the largest combine harvester in the world but also a very unusual harvester. Instead of the standard design, the engineers of the American manufacturer Tribine developed a combine harvester with a rotor, articulated joint, and rear steering wheels. Another appealing aspect is that the car has two Cummins engines, one in the front and another in the rear, which provide 650 hp. The largest grain hopper has a capacity of 35,200 liters (9,298 gallons), and the unloading speed is almost 300 l (79 gallons)/s – unmatched until now. The Tribine T1000, which has a mass of 25 t (50,000 pounds), will not be seen on European fields, as the transport width of the combine is 4.44 m (14,56 ft) and is therefore too wide for most EU roads. The Tribine T1000 price is around $550,000.

What’s the biggest combine in the world ?

What is the world’s largest combine corn header?

Last update: November 21, 2022The world’s largest combine header for corn is the NorthStar Elite XL series. This corn header was designed to ensure all farmers the best performance on all fields, including the difficult ones.

It includes the Crow Flow Reel that manages to process the stalk while breaking down the soil after harvesting.

Moreover, featuring 24 rows and 30″ (76 cm) row spacing, the NorthStar Elite XL boasts the title of the largest header for corn in the world.

What is the most powerful combine?

Last update: November 20, 2022The title of the most powerful combine does not belong to one but two combines.

The Fendt Ideal 10T combine and Class Lexion 8900 combine are the most powerful in the world. Both of them were manufactured with the MAN 16.2 engine that is capable of developing 790 hp.

Last update: November 16, 2022The biggest Case IH combine is the Axial-Flow 9250. It was designed with an engine capable to develop 550 hp and with a tank capacity of 410 bu (14,448 l) that allows it to operate continuously for many hours.

The Case IH combine will perform regardless of the conditions of the field.

What company makes the best combine?

Last update: April 14, 2022Some of the biggest players on the market that make the best combines are John Deere, Claas, and New Holland.

They are known for their high-performance machines but also for the innovative technologies that they improve even more each year.

Who sells the most combines in the world?

Last update: September 5, 2022At the top of the list of who sells the most combines in the world are 5 large and well-known companies among farmers and all those who work in agriculture.

The five companies that hold more than 71% of the market share are AGCO, Case IH, John Deere, KS Group, and Mahindr&Mahindra. They are followed by other famous brands such as New Holland, Claas, and CNH Industrial.

All combines made by these companies are preferred by farmers due to their technical characteristics, engine power, and incorporated technologies, but also due to their transfer capacity.

AGCO and John Deere are the companies with the most sales, being also the largest producer of combine harvesters in the global combine harvester market. After all, the two companies hold together approximately 35% market share. But this percentage was reached thanks to their strategy of focusing on the development of new technologies that will make crop production easier.

In conclusion, each farmer knows that grain quality depends on the harvesting conditions and the combine harvester used.

Machinery such as a Tribine harvester or X9 combine that are designed with an efficient threshing and cleaning system, a spacious separating area that ensures the grain is clean and free of debris, a large grain bin, and a high unload rate could be an excellent choice for a farmer or agricultural business that makes large-scale harvesting operations

FarmerDB is supported by our readers. When you buy through links on our site, we may earn an affiliate commission at no cost to you. Read more